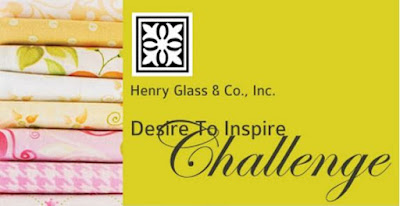 This is an interview from our most recent winner of the Desire to Inspire Challenge!

Where do you live: New Mexico

Family: I have been married to my best friend for over 35 years. I have a daughter, a son and one grandson.

How long have you been quilting: I first began quilting back in the early 1970’s. My mother taught quilting at a local college in the evenings and then a couple of years she later opened a quilt store in Tarzana, California called Quilt ‘n Stuff (in the mid 1970’s). I worked full time in the shop for my mom. Piecing, appliqué and quilting was all done by hand back then. Tracing around cardboard templates onto fabric and then cutting the shapes out with scissors. Mom’s shop only lasted for a year. If she had only known rotary cutters, rulers and mats would soon be invented around 1980, I wonder if she could have hung on until then?  Our lives would both be different today though. I wouldn’t have met my husband and I am glad that my life turned out the way is has, but still it makes you wonder what would have happened.

Then some years later when I had young children, I picked up a VHS tape of a PBS show starring Eleanor Burns called Quilt-in-a-Day, at our local library. I was amazed when I saw Eleanor using a rotary cutter, ruler and mat and how fast and easy it looked. Plus she sewed the pieces on her sewing machine! I had to try that! So I ordered her rulers and her book and then bought a rotary cutter and mat at the local fabric store. I was hooked! I have been quilting, piecing and doing appliqué ever since. I have gone much farther with quilting than my mother ever did.

What's your favorite technique? I love fusible appliqué the best. I usually sew a blanket stitch around the appliqué.

Who taught you how to quilt? I watched my mother and picked it up from her. She would be preparing quilt blocks for the classes that she taught. I borrowed her books and taught myself. Mom was there to help if I had a question, but she was too busy to sit down and actually teach me every step herself, LOL!!!

Do you belong to any guilds? I do belong to three groups that each meet once a month. Occasionally I go to a large quilt guild that I used to belong to. I prefer the smaller groups because I have really gotten to know these ladies, whereas with the larger group you really can’t get to know all the women very well.

Anything else you would like to share with our readers? I have been blogging about quilting, knitting and bags I make, etc. on my blog since 2008 @ Patchouli Moon Studio. I hope you all stop by for a visit
I made a flag banner out of the fabrics that I received (Patriotic Primer). It was hard to get a really good photo of this on my wall, but it looks wonderful in person!

Here are a few shots of them up-close: 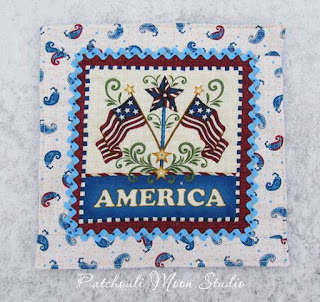 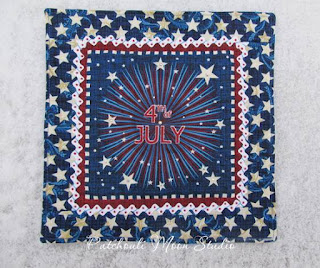 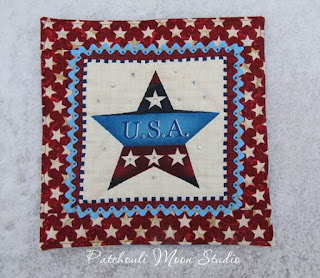 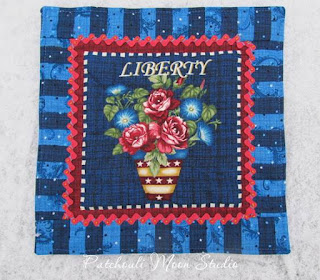 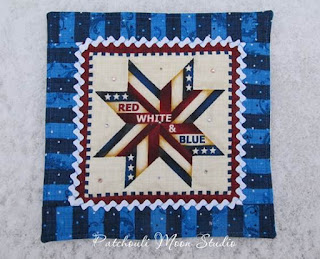 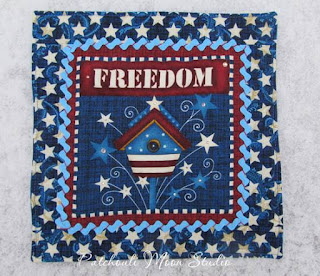 It's hard to see but there are crystals used as accents on several pieces, so the when the light hits these they really sparkle: 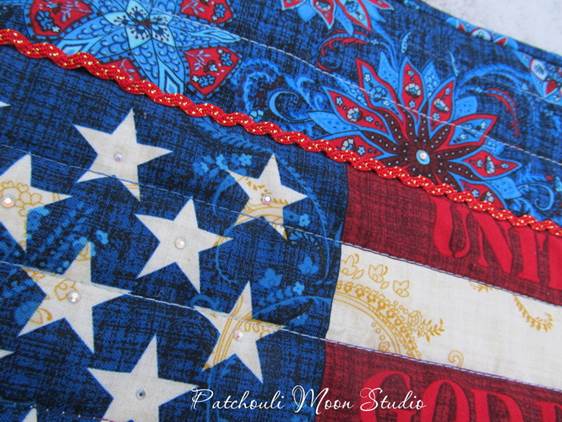 Very creative and useful too

Daryl is such an inspirational and creative blogger, crafter, quilter, seamstress...she does it all! Her projects inspire me to work outside of my comfort zone and play with new ideas and techniques. Congrats Daryl on another successful and challenging project, love it!

Love learning more about Daryl. I follow her blog and she's quite an artist.

Great interview with Daryl. I love the banner she made and adding the crystals was so perfect for the project and very creative on her part.

Your banner is beautiful, Daryl, and looks gorgeous against your blue wall. Your tiny crystals surely enhance the fabric beautifully. It was a very good idea to make a banner. I also loved reading about you and your beginnings at quilting. (I still trace around paper with a pencil and cut with scissors. lol )

Thanks for the challenge. I had fun making this and now it hangs in our living room and looks great.

Thank you for featuring Daryland her many talents. I have followed her blog for a long time. I LOVE the Patriotic Banner she created with your Henry Glass Fabrics. 2016 will be an amazing year...

I love Daryl's blog it truly inspires me, she is the queen of adding little touches that makes her work so unique. Daryl is good at using a little embroidery or rick rac in just the right amount. I liked reading your questions and of course Daryl's answers, its always interesting to learn more about other quilters and how they got started.
Tara